To adapt to rapidly changing markets, organisations must enhance their established products as well as exploring new product offerings. When the profitability of an existing product is limited by Discontinuous Delivery, a rewrite should be considered a last resort. However, it might become necessary if a meaningful period of code, configuration, and infrastructure rework cannot achieve the requisite deployment throughput and production reliability.

Rebuilding a software product from scratch is usually a costly and risky one-off project, with little attention paid to customer needs. Replicating all the features in an existing product will take weeks or months, and there may be a decision to wait for feature parity before customer launch. It can be a while before Continuous Delivery becomes a reality.

The production cutover will be a big bang migration, with a high risk of catastrophic failure. The probability and cost of cutover failure can be reduced by Decoupling Deploy From Launch, and regularly deploying versions of the new product prior to launch.

For example, a fictional Gamez retail organisation has an ecommerce website. The website is powered by a monolithic application known as eCom, which is hosted in an on-premise data centre. Recently viewed items, gift lists, search, and customer reviews are features that are often praised by customers, and believed to generate the majority of revenue. eCom deployments are quarterly, production reliability is poor, and data centre costs are too high.

There is a strong business need to accelerate feature delivery, and a rewrite of the Gamez website is agreed. The chosen strategy is a rip and replace, in which the eCom monolith will be rebuilt as a set of cloud-native services, hosted in a public cloud provider. Each service is intended to be an independently testable, deployable, and scalable set of microservices, that can keep pace with market conditions.

There is an agreement to delay customer launch until feature parity is achieved, and all eCom business logic is replicated in the services. Months later, the services are deemed feature complete, the production cutover is accomplished, and the eCom application is turned off.

The main motivation for rebuilding a software product is to accelerate delivery, validate product hypotheses, and increase revenues as a result. Waiting weeks or months for feature parity during a rebuild prolongs Discontinuous Delivery, and exacerbates all the related opportunity costs that originally prompted the rewrite.

Back at Gamez, some product research conducted prior to the rebuild is unearthed, and it contains some troubling insights. Search generates the vast majority of website revenue. Furthermore, product videos is identified as a missing feature that would quickly surpass all other revenue sources. This means a more profitable course of action would have been to launch a new product videos feature, replace the eCom search feature, and validate learnings with customers. An opportunity to substantially increase profitability was missed.

Rebuilding a software product right means incrementally launching features throughout the rebuild. This can be accomplished with the Strangler Fig architectural pattern, which can be thought of as applying the Expand and Contract pattern at the application level.

Strangler Fig means gradually creating a new software product around the boundaries of an existing product, and rebuilding one feature at a time until the existing product is no more. It is usually implemented by deploying an event interceptor in front of the existing product. New and existing features are added to the new software product as necessary, and user requests are routed between products. This approach means customers can benefit from new features much sooner, and many more learning opportunities are created. 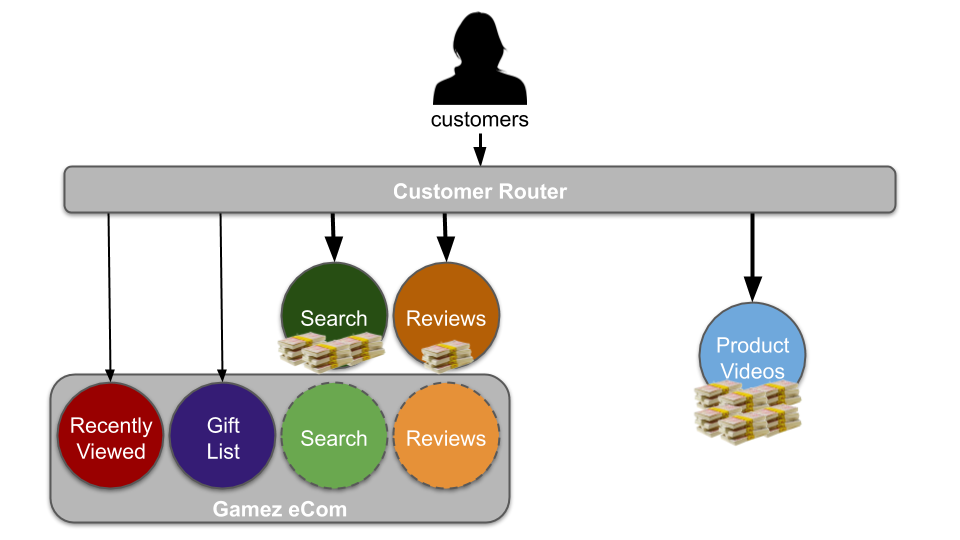