We want to quickly deliver new features to users, and in Continuous Delivery Dave Farley and Jez Humble showed that “to achieve these goals – low cycle time and high quality – we need to make frequent, automated releases“. The pipeline constructed to deliver those releases should be no different and frequently, automatically released into Production itself. However, this conflicts with the Continuous Delivery principle of Repeatable Reliable Process – a single application release mechanism for all environments, used thousands of times to minimise errors and build confidence – leading us to ask:

Is the Repeatable Reliable Process principle endangered if a new pipeline version is released?

To answer this question, we can use a risk impact/probability graph to assess if an update will significantly increase the risk of a pipeline operation becoming less repeatable and/or reliable. 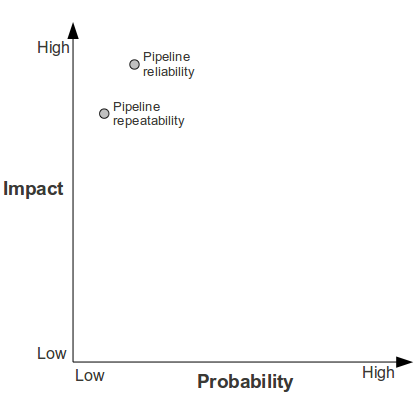 This leads to the following assessment:

Based on the above, we can now answer our original question as follows:

A pipeline update may endanger the Repeatable Reliable Process principle, and is more likely to impact reliability than repeatability

We can minimise the increased risk of a pipeline update by using the following techniques:

Finally, it is important to note that a frequently-changing pipeline version may be a symptom of over-centralisation. A pipeline should not possess responsibility without authority and should devolve environment configuration, application configuration, etc. to separate, independently versioned entities.