Described by Elisabeth Hendrickson as originating with the misguided belief that “testers test, programmers code, and the separation of the two disciplines is important“, the traditional segregation of development and testing into separate phases has disastrous consequences for product quality and validates Jez Humble’s adage that “bad behavior arises when you abstract people away from the consequences of their actions“. When a development team has authority for changes and a testing team has responsibility for quality, there will be an inevitable increase in defects and feedback loops that will inflate lead times and increase organisational vulnerability to opportunity costs. 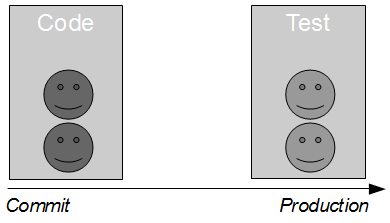 Agile software development aims to solve this problem by establishing cross-functional product teams, in which testing is explicitly recognised as a continuous activity and there is a shared commitment to product quality. Developers and testers collaborate upon a testing strategy described by Lisa Crispin as the Testing Pyramid, in which Test Driven Development drives the codebase design and Acceptance Test Driven Development documents the product design. The Testing Pyramid values unit and acceptance tests over manual and end-to-end tests due to the execution times and well-publicised limitations of the latter, such as Martin Fowler stating that “end-to-end tests are more prone to non-determinism“. 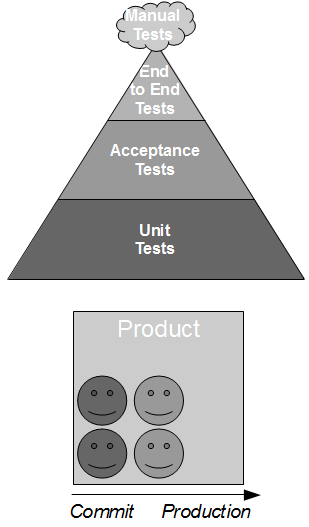 Given Continuous Delivery is predicated upon the optimisation of product integrity, lead times, and organisational structure in order to deliver business value faster, the creation of cross-functional product teams is a textbook example of how to optimise an organisation for Continuous Delivery. However, many organisations are prevented from fully realising the benefits of product teams due to Release Testing – a risk reduction strategy that aims to reduce defect probability via manual and/or automated end-to-end regression testing independent of the product team. 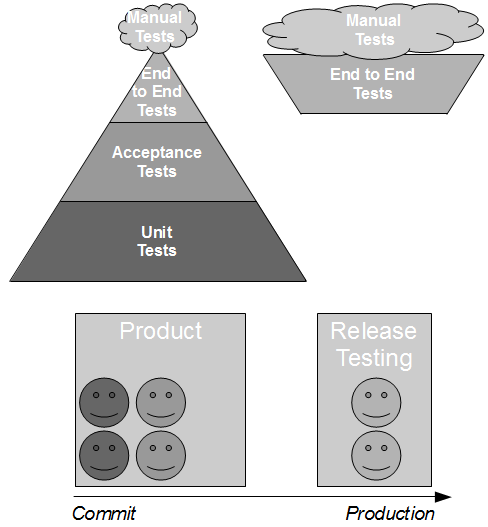 While Release Testing is traditionally seen as a guarantee of product quality, it is in reality a fundamentally flawed strategy of disproportionately costly testing due to the following characteristics:

As Release Testing is divorced from the development of value-add by the product team, the regression tests tend to either duplicate existing test scenarios or invent new test scenarios shorn of any business context. Furthermore, the implicit and explicit constraints of end-to-end testing on the critical path invariably prevent Release Testing from achieving any meaningful amount of test coverage or significant reduction in defect probability.

This means Release Testing has a considerable transaction cost and limited value, and attempts to reduce the costs or increase the value of Release Testing are a zero-sum game. Reducing transaction costs requires fewer end-to-end tests, which will decrease execution time but also decrease the potential for defect discovery. Increasing value requires more end-to-end tests, which will marginally increase the potential for defect discovery but will also increase execution time. We can therefore conclude that Release Testing is an example of what Jez Humble refers to as Risk Management Theatre – a process providing an artificial sense of value at a disproportionate cost:

To undo the detrimental impact of Release Testing upon product quality and lead times, we must heed the advice of W. Edwards Deming that “we cannot rely on mass inspection to improve quality“. Rather than try to inspect quality into each product increment, we must instead build quality in by replacing Release Testing with feedback-driven product development activities in which release testers become valuable members of the product team. By moving release testers into the product team everyone is able to collaborate in tight feedback loops, and the existing end-to-end tests can be assessed for removal, replacement, or retention. This will reduce both the wait waste and overprocessing waste in the value stream, empowering the team to focus upon valuable post-development activities such as automated smoke testing of environment configuration and the manual exploratory testing of product features. 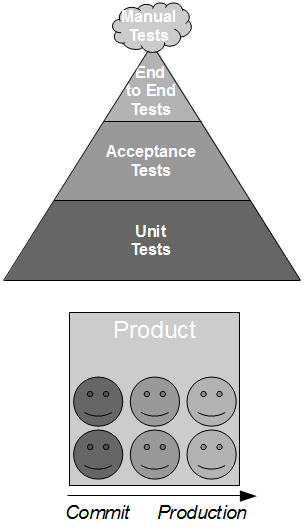 Release Testing is not the fault of any developer, or any tester. It is a systemic fault that causes blameless teams of individuals to be bedevilled by a sub-optimal organisational structure, that actively harms lead times and product quality in the name of risk management theatre. Ultimately, we need to embrace the inherent lessons of Agile software development and Continuous Delivery – product quality is the responsibility of everyone, and testing is an activity not a phase.