Why is Bimodal IT so fundamentally flawed? Why is it just a rehash of brownfield versus greenfield IT? What is the delusion that underpins it?

This is Part 2 of the Strategising for Continuous Delivery series

Bimodal IT is a notoriously bad method of IT transformation. In 2014, Simon Mingay and Mary Mesaglio of Gartner recommended in How to Be Digitally Agile Without Making a Mess that organisations split their IT departments in two. The authors proposed a Mode 1 for predictability and stability of traditional backend applications, and a Mode 2 for exploration and speed of digital frontend services. They argued this would allow an IT department to protect high risk, low change systems of record, while experimenting with low risk, high change systems of engagement.

For example, a MediaTech organisation has an on-premise application estate with separate development, testing, and operations teams. Product stakeholders demand an improvement from monthly to weekly deployments and from 99.0% to 99.9% reliability, so a commitment is made to Bimodal. Existing teams continue to work in the Mode 1 on-premise estate, while new teams of developers and testers start on Mode 2 cloud-based microservices.

This includes a Mode 2 videogames-ui team, who work on a new frontend that synchronously pulls data from a Mode 1 videogames-data backend application. 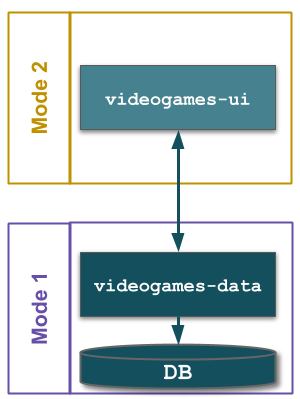 Bimodal is a transformation strategy framed around technology-centric choices, that recommends capital investment in systems of engagement only. It is understandable why these choices might appeal to IT executives responsible for large, mixed estates of applications. Saying Continuous Delivery is only for digital frontend services can be a rich source of confirmation bias for people accustomed to modernisation failures.

However, the truth is Bimodal is just money for old rope. The Bimodal division between Mode 1 and Mode 2 is the same brownfield versus greenfield dichotomy that has existed since the Dawn Of Computer Time. Bimodal has the exact same problems:

The dependency problems are critical. Bimodal architecture is predicated on frontend services distinct from backend applications, yet the former will inevitably be coupled to the latter. A Mode 2 service will have a faster development speed than its Mode 1 dependencies, but its deployment throughput will be constrained by inherited Mode 1 practices such as End-To-End Testing and heavyweight change management. Furthermore, the reliability of a Mode 2 service can only equal its least reliable Mode 1 dependency.

At MediaTech, the videogames-ui team are beset by problems:

As a result, the videogames-ui team are only able to achieve fortnightly deployments and 99.0% reliability, much to the dissatisfaction of their product manager.

This is the Bimodal delusion – that stability and speed are a zero-sum game. As Jez Humble explains in The Flaw at the Heart of Bimodal IT, “Gartner’s model rests on a false assumption that is still pervasive in our industry: that we must trade off responsiveness against reliability”. Peer-reviewed academic research by Dr. Nicole Forsgren et al such as The Role of Continuous Delivery in IT and Organizational Performance has proven this to be categorically false. Increasing deployment frequency does not need to have a negative impact on costs, quality, or reliability.

This is Part 2 of the Strategising for Continuous Delivery series

Thanks to Thierry de Pauw for reviewing this series.